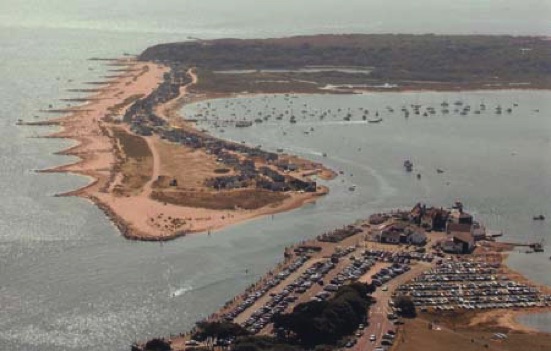 A Temple To Love

Beach huts are not traditionally linked with Christian or Pagan beliefs, or Classical Mythology. But they are linked to the idea of a paradise on earth in popular culture and in our all too easily influenced minds ... Read more here ...

If you�re visiting Christchurch Priory and are interested in the sort of historical mystery that appears in books like Holy Blood, Holy Grail and The Da Vinci Code, the Priory has for some time been haunted by its own local mystery, to do with the Knights Templar. Was England�s last surviving Templar a prisoner kept at Christchurch Priory? [read more]

Welcome To The Mudeford Sandbank News

Is your beach-hut safe from flooding? Or will the long arm of global warming reach your shore? This article looks beyond the current headlines .... [more]

The Coming Of The Corsairs

Stand atop Hengistbury Head and look out over the bay and you will be gazing on the scene of countless true-life episodes you can read about in the history books. For you are looking at a stretch of coast that has long stood in the front line of Britain�s history.... [more]

The Battle For Press Freedom

The struggle to establish a free press had a surprising local connection ... [more]

On March 18th at auction (auctioneers Symonds and Sampson) a sleeping beach hut failed to meet its reserve of �80,000, confirming local knowledge that sales had stalled on the beach. It is apparent from nearly two-dozen �For Sale� signs before the Easter holiday that although vendors are anxious to sell, buyers are currently few and far between. This is most unusual... [read article]

The French Revolution and subsequent Napoleonic Wars ended the English upper class fashion for the European Grand Tour and holidays at continental spas. Instead, the new �sea-bathing� resorts of Brighton, Lyme and Weymouth became fashionable Regency-era "watering-places," growing within a generation into popular tourism destinations. One resort however, despite meeting the basic requirements for a fashionable Georgian-Regency resort, and enjoying patronage from the nation�s elite, never grew to become a household name ... The 'Marine Village' of Muddiford. [read article]

On the Trail of the Wholesome Well

As a child, drinking deep from the books and tracts available to me, I discovered a small pre-war guide to Christchurch which had the following passage: By the roadside here and sadly neglected, is the one-time famous �Tutton�s Well,� which has a constant supply of pure water fed by underground springs, whose source is far inland under the high hills of the Forest.... [read article]

This site includes content archived from the Mudeford Sandbank News, and from two sister publications no longer published, the Christchurch Harbour Chronicle and Hengistbury Head Times.

To view the archive, there are various options.

view a selection of images from the Image Archive,

Note that back issues are archived as full-page images, so you may want to view them full screen.

(On most Windows PCs with standard keyboards, press F11 key to toggle full-screen mode on and off, or in Internet Explorer, select View > Full Screen.)

External Links PageYou may also find these links of interest.